New natural alternatives to antibiotics for gut health in calves

The problems and consequences of AMR Anti Microbial Resistance (AMR) is now a major global concern and has been identified as one of the most serious threats to the maintenance of human and animal health in the future.

The OIE ,WHO and the EU Commission have become very vocal on this issue, and have published numerous position papers and recommendations on this topic, with a view to avoiding and minimizing this growing threat of AMR. The EU in its “One Health Initiative” and “Horizon 2020” programmes have focussed on the need to restrict and limit the therapeutic usage and the indiscriminate usage of antimicrobials in animals ,and they have emphasized the urgent need to develop alternatives to antibiotics in veterinary medicine and in animal husbandry. The EU has encouraged Member States to assist in the funding of companies and research institutions in finding ways to circumvent the use of antibiotics, through the research and development of viable non antibiotic alternatives.

The new Veterinary Medicines Regulation (2019/6 of 11 December 2018) has spelled out the need to restrict antimicrobial usage on farms and has banned the metaphylactic and prophylactic use of antimicrobials in animals especially by the oral route. This regulation will come into effect in January 2022.

The aim of the new Veterinary Medicines Regulation:
• Control of AMR in the EU as it relates to the use of veterinary antibiotics
• Ban of the prophylactic use of antibiotics in farm animals per 2022
• Encourage funding of industry to develop safe and proven alternatives to antibiotics
• All the above are in the interests of human and animal health globally
• At political & consumer level, there is a global demand and desire for:
– Green, safe and sustainable food production
– Alternatives to assist global health and reduce AMR

Because of the serious implications of antibiotic resistance for human health via , cross resistance and transferable drug resistance from pathogens of animals to man, or via commensals in the gut, the OIE and WHO in 2018 drew up its sixth revised list of Critically Important Antibiotics (CIA’s) in human medicine. In that document, they set out a programme for the avoidance of the use of these critical antibiotics in animal therapy, in so far as it is possible. It also provided a ranking system categorizing the stringency and limitations of usage of such CIA antimicrobials in veterinary medicine.

In short, with the ever decreasing list of currently available antibiotics, the growth of resistance to them, and the dearth of new and novel antibiotics arriving into the market place, it has never been so timely to develop and deliver new effective and proven alternatives to traditional antibiotic substances.

Results of field trials with AuraCalf in calves

Numerous field trials have been carried out on the product and these all have consistently shown:
• Reduced incidence of disease in calf hood
• Reduction in the use of antibiotics in calves by up to 50%
• An enhancement of average daily gain, feed conversion efficiency and weight gain at weaning when compared to untreated controls ( effects shown to be statistically significant in trials)
• AuraCalf treated calves are 12-15% heavier at weaning compared to untreated controls

Auranta Ltd is a new Irish biotech company which has developed as a spin out campus company from university researchers. It is also a category winner in the Irish Times Business Innovation Awards for 2019. In the last three years it has focussed on the development of a suite of plant based phytochemicals with a wide range of proven physiological and protective actions. These unique compounds have been formulated as natural additives for use in calves, poultry and pigs. They are intended as production enhancers and as alternatives to antibiotics. The formulations are based on a unique mix and combinations of natural polyphenols with the addition of specific organic acids and other plant based extracts to provide a symbiotic effect from the entire range of ingredients. Polyphenol products have been widely described in the peer reviewed scientific literature in their various roles as anti-oxidants, immunity enhancers, microbiome stabilisers and numerous other biological actions. They do this via a natural physiological action and they are not synthetic chemicals. In short, these natural products help the animal to help itself.

AuraCalf is Auranta’s oral additive for use in calves and in just three years it has developed a very sizeable market as a calf production enhancer in Ireland and also in ten other countries overseas.

AuraCalf is not a veterinary medicine nor does it make any therapeutic claims to be one. It is not used to treat or prevent disease. It is a natural additive which augments in a natural physiological way the gut microbiome, the gut immunity and local gut health. AuraCalf is an additive for enhancement of gut health to be fed to young calves from birth to weaning. It has undergone extensive field trials in calves, from birth to 56 days, with demonstrable positive benefits recorded. It has also been rigorously evaluated in laboratory research, with regards to its physiological activities and it’s beneficial effects on production in calves. Laboratory studies and scientific papers by researchers in Auranta ltd have shown that AuraCalf has a number of natural and physiological actions:
(1) it seals tight junctions in the gut ,thereby minimizing entry of micro organisms, colonization & establishment
(2) it increases local immunity in gut cells via natural interferons and cytokine production , thus increasing local gut health and epithelial integrity
(3) it has a major natural beneficial effect on the gut microbiome ,maintaining an optimum equilibrium and balance of micro organisms
(4) It increases the villus crypt ratio in the absorptive cells of the intestine, thus maximizing absorption and utilization of nutrients
(5) By enhancing the normal balance and function of a healthy gut microbiome, it increases immunity and minimizes the risk of infections taking hold

Positive health & nutrition status pre weaning in calves has positive downstream benefits on future productivity AuraCalf enables calves to be reared in better health, with heavier weights at weaning. Crucially, it reduces the need for antibiotics in rearing young calves as can be seen from trial results where a 50% reduction was observed.

Recent scientific literature provides evidence that high nutrients and disease free status pre weaning in calves has a positive imprinting effect on growth and subsequent lactation performance. Imprinting of future development of mammary gland tissues occurs before weaning in calves. Antibiotic treatment pre weaning in calves has been shown to retard subsequent milk production in cows, when it is compared to milk production in cows where the calves never received antibiotics pre weaning. This “lactocrine imprinting” is now a well accepted phenomenon, and is positively affected by increased growth rates, high nutrients & high immunity in calf hood up to weaning.

It would appear that the less antibiotic that is used pre weaning, (and the less disease that occurs) positively affects performance, production, and milk capacity subsequently in the adult animal. Published evidence shows that high immunity in the pre weaning stage ,disease free status, & high nutrition in pre weaned calves, increases the future mammary gland parenchymal tissue development (site of casein synthesis). There are now many peer reviewed scientific publications in the international literature substantiating this “pre weaning imprinting “concept.

On the basis of the current evidence in using the AuraCalf product under field conditions ,such natural additives and phytochemicals would appear to have a major role in the enhancement of animal health and immunity ,and can be seen as valuable and viable alternatives to antibiotics in the future, once proven under field use. It is undoubtedly an area that should be developed more intensively, and is likely an avenue of approach which should be explored further.

Published by the magazine It’s your field 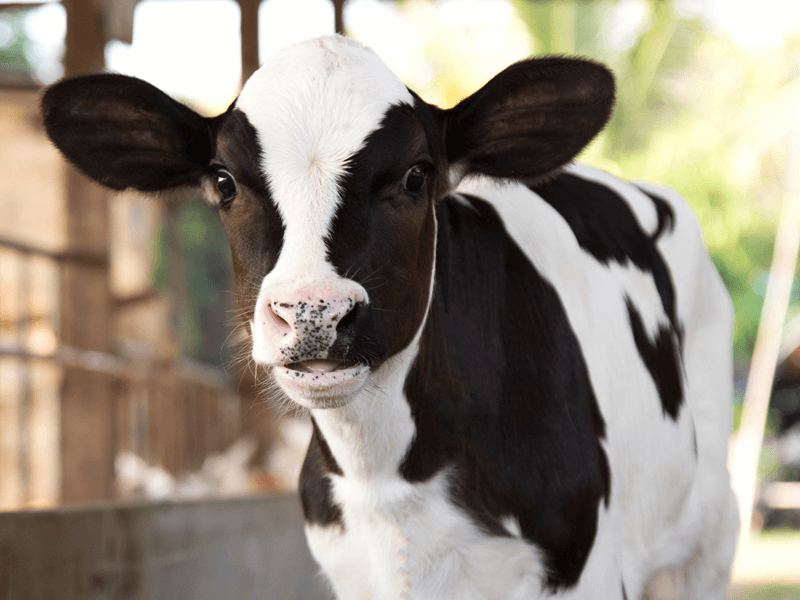